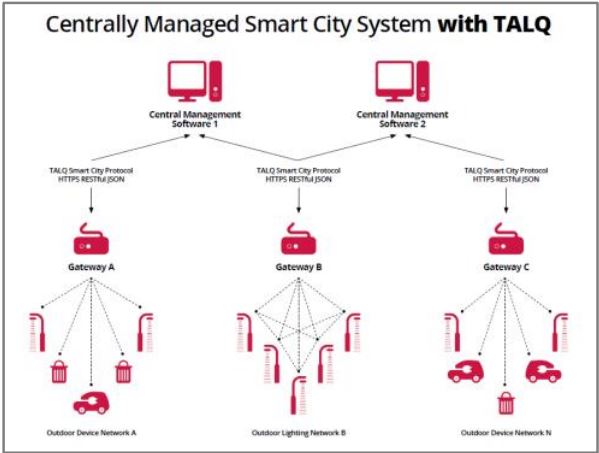 The TALQ Consortium has developed a global standard protocol to enable Central Management Software to configure, control, command and monitor multiple Outdoor Device Networks from various suppliers through an easy-to-integrate RESTful/JSON protocol. TALQ is open to industry members to join and participate in the evolution of the TALQ Protocol.

The TALQ 2.0 Smart City Protocol is based on a RESTful architecture and a JSON data model representation, because of their widespread use and inherent simplicity of implementation. The protocol is released as a Technical Specification document, two Open API v3 (OAS 3) files and one JSON Schema file, which describe both the CMS and Gateway APIs and the data model in JSON, so that software developers can easily generate their source code using Open API tools (e.g. Swagger) and support TALQ in their CMS or Gateway.

Request a copy of this Whitepaper via the form below

Give us your details and one of our team will email it to you in the next 5 days.

Insight: The lowdown of our visit to LoRaWAN® Live 2019

The LoRaWAN® Live event was recently held on 13th June 2019, in Berlin. Part of LoRa Alliance’s Annual Members’ Meeting, the event welcomed both members and external guests…
Find out more

We recently launched our Top Tips for Smart City Success blog series, which aims to provide a number of core insights into how smart cities are making a positive impact around the…
See industry insight